More than 80 people of all ages joined together to sing ‘Happy Birthday’ as Nar Nar Goon Kindergarten celebrated it’s 60th Birthday on Sunday the 20th of October, 2019. The afternoon tea event saw community members, students and staff – both past and present, able to tour the kindergarten, playground and attached Val Carroll gardens, view photos, newspaper articles and memorabilia and catch up with familiar faces.

The kindergarten started in the Infant Welfare Centre in the third term of 1959 with 12 children and a voluntary teacher and parent, Joan Rose and was held once a week. Both the land and the building for the centre were provided by the community- a unique historical fact that was expanded on by Pauline ‘Bones’ Mackinnon as she spoke about the earliest history of the kindergarten. A ‘Popular Baby’ contest was one of the fundraising events held by the community to again raise funds for the much needed extensions in 1966 as the kindergarten program grew.

Current teacher, Linda English, who has been working at the kinder for 10 years, welcomed everyone, acknowledged her assistant, Denise Mason who has been there for 17 years, before inviting current and past students from the kindergarten to perform an Acknowledgement of the Land together. Michelle Adams, who taught in 1991 – 2001 travelled from Mt Gambier specifically to attend the event and spoke fondly about her love for the kinder and what great memories she had from teaching there. Cardinia Shire Mayor Graeme Moore also recounted his family move from Dandenong specifically for the Nar Nar Goon Kindergarten and school which two of his three children attended.

There was much conversing throughout the afternoon as the adults exchanged memories and made notes in the collated history and the youngsters played eagerly on the equipment and in the gardens. Val Carroll, who taught at the kindergarten from 1971 – 1993 was ‘so excited’ that she couldn’t eat her cake and had to take it home with her! She even recognised one of her past students, Kerry Harley who is current PAG President, and whose children have and currently attend the kindergarten.

Other familiar faces included Val Porter (assistant from 1992 – 2002), Deb Sillcock (teacher from 1988 – 2005), Gladys Quigley, mother to Mark and Rusell who were amongst the first students to attend the kinder when it opened, Diane Henwood, Jenni McPhee, Tricia Scanlon, Susan McQualter who all attended kinder in the 1960s, along with several other past students who had attended, and now have their own children attending – Meagan Rogers and Kerrie Johnson.

Students from surrounding schools, St James Primary School and Nar Nar Goon Primary School wrote down their favourite memories of attending NNG kindergarten for the event which were bound and enjoyed by many too.

With such a rich history built on community support, and so many years of serving the community over multiple generations, it was clear to all that this is a kindergarten worth celebrating.

Pauline (Bones) Mackinnon recalls the beginnings and rich history of the kindergarten from its earliest years.

Jaylen, Matthew, Kayla, Joel and Jasmine enjoyed looking over their time at the kindergarten.

Val Carol, Michelle Adams and Val Porter. All worked at the kindergarten for a number of years. 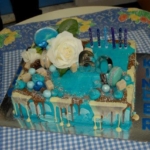