The children’s fascination with magnetic attraction and repulsion was ignited when one of the children discovered he could construct a spinner from magnets. Others observed closely then made their own spinners.

“I made a fidget spinner! You need a ball to make it spin. I saw the ball could spin and then I could fit it in this hole. I invented this!”

When the children spun their spinners close together they observed them moving towards and “grabbing” each other. They discovered that a magnet had the power to make another magnet move without touching it.

“When it spins it grabs the other magnets.”

“There are things inside magnets called steel.”

“Every metal thing sticks to a magnet.”

Over several weeks the magnetic spinners continued to be the focal point of many of the children’s investigations. We made several videos featuring the children working with magnets, which we watched during our morning meetings. The videos prompted further inquiry, interest and experimentation. It was discovered that the spinner could be made to spin by moving a strong magnet in a circular motion above it. The children were astounded to see the spinner move without anyone touching it. The spinners were then set into motion on the overhead projector, which resulted in a fabulous visual effect. The children observed that when the spinner was moving its arms seemed to blur and almost disappear.

“When something goes really fast you can’t see it. Watch my hand (the child waves his hand rapidly and everyone watches it become blurry.”

To enable further investigation into the properties of magnets we provided a pendulum. The children observed how the magnetic pendulum responded when they moved a bar magnet below and around it.

“It’s following! When you swing it, it stops!”

“I put one magnet under and it went all wobbly.”

One child made an extremely interesting discovery while working with the pendulum. She placed several small magnets under the pendulum and watched it swing. The swinging pendulum caused the small magnets to move slightly….gradually becoming closer together. Then all of a sudden they dramatically snapped together!

“It wiggles and connects.”

Another group of children decided to test the strength of a bar magnet by observing how many metal balls it could hold.

“This magnet is very strong. It can hold THIS many.”

“I know…we can make an experiment! I’m stacking them on. I can’t even count how many! It looks like a bunch of grapes. It’s a big ball of shiny balls. I created it myself.”

The children enjoyed discussing their theories and sharing their discoveries with each other. 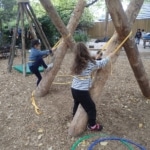